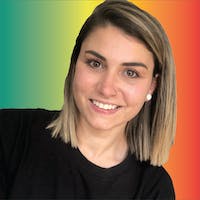 There's a ton to learn with React, but here's some of the beginner basics to get you familiar with the framework.

Setting Up the Project

npx is not a typo. It is a package runner tool that comes with npm.

JSX is not specific to React, or required in React, but it makes things a lot easier. It is using React.createElement() behind the scenes.

Typically functions native to React are written with regular functions:

There are many more advanced concepts for using React like State, Hooks, Context, and more. These are just the basics to get you started!